The Birth of Roland

The start of the holiday season always brings to mind the following birth story. As a naturopathic birth doula, I am always honoured and grateful my patients allow me to to be a part off this very special moment in their lives, a feeling that I am reminded of each time I recount the story of this birth.

Erika had called me for the third time since her contractions had begun, two days previous. She had felt a noticeable change in her contractions and asked me to come to her home, the setting in which she had decided to birth. It is pretty amazing how a little experience (this was her second birth) made such a difference. She knew things were really happening now. She knew she needed her support people in place. Her husband was with her, her midwife, Nicole, was on the way, and I completed the birth team. Erika’s mother had come and picked up Erika’s daughter so she could focus solely on her needs and those of her new baby.

I arrived at her home soon after the call. It was a beautiful snowy, Christmas Eve morning. When I entered her home, I was aware of how comfortable Erika was and how relaxed everyone was together. We had all been present for her first birth and excited to be part of her second.  Erika was labouring well.

Erika had decided to have a water-birth. The birth tub was in place, and her husband, Adam, busied himself with the final steps of inflating and filling it with warm water. Birth tubs are great for the labouring mother’s comfort, but also as a means involving dads or partners (and keeping them busy if they’re anxious).

That morning, after two days of mild cramping, Erika’s cramps required more effort to ignore and were not subsiding, a sure sign of the “official” beginning of labour. With increased intensity of cramping, we began to employ comfort measures: Focus on breathing with each contraction, “hip squeezes” during contractions, and pressure applied to the low-back and over the sacrum. After two hours, Nicole checked her dilation. At “3–4 cm dilated” she was entering “active labour”, a relief to a labouring mom because it means the longest portion of labour is behind her.

Although longest portion is over, active labour is most physically intense portion of the birthing experience. During active labour contractions are strong, and are often characterized by a “peak”. The onset of more intense pain will sometimes undermine a labouring mothers’ confidence. With her contractions increasing in intensity, we guided Erika to the birth tub. The warm water offered immediate pain-relief, helping her entire body to relax. Once relaxed, Erika was able to center again and we were back on track.

After a couple of hours in the tub, Erika experienced a sudden change in emotion, and began suddenly to cry. Pulsatilla nigrans is a homeopathic medicine that can be given to persons who have the tendency to be overwhelmed by emotions by responding, specifically, by crying (rather than, for example, with anger). Erika fit that description at that moment, and after a few pellets of Pulsatilla nigrans and a few moments, she felt calmer.

The final stage of active labour, just before birthing, is called “transition”. Fear is another commonly experienced emotion during labour, and in my experience, it often occurs at transition. It is essential to offer mothers at transition a lot of support and reassurance. We reminded Erika of her strength, we coached her in her breathing to help her feel relaxed, but the fear was becoming difficult to control. Gelsemium sempervirens is a homeopathic medicine that can be used to calm a person in an acute state of fear, specifically fear with an anxious quality (e.g., “I don’t know what to expect/how this will turn out”).

With the fear receding, Erika began to feel a natural urge to “push”. The intensity of her body’s natural urge surprised her, and her baby was out with three strong, well-controlled pushes. He was born into the water of the tub (baby’s are still supplied oxygen through the umbilical cord) and placed immediately, skin-to-skin, on Erika’s chest. Immediate skin-to-skin contact with their mother is essential to a newborn in so many ways: They are happier, their temperature, heart and breathing rates are more normal, and they are able to be colonized by their mothers’ bacteria (an important preventative measure against developing allergies later in life). They are also able to exchange sensory information with their mothers, stimulating the development of “baby behaviours” such as rooting for the breast when hungry and natural breathing, as well as developing emotional attachments that cannot be quantified. Immediate skin-to-skin contact is not a given in many hospital environments.

Adam joined Erika and baby Roland in the tub, where they spent their first time together as a family.

As a doula, I recognize this as an essential time for family bonding. Her midwife and I receded into the background to let it happen. I stayed with Erika until her placenta was birthed, and until Roland had had his first and second “feeds”, to ensure he was latching to her breast well. As I left for my own family Christmas Eve celebration, Erika, Adam were beaming, and Roland was sleeping.

Thank you Erika, Adam and Roland for allowing me the honour of participating in your beautiful birth. 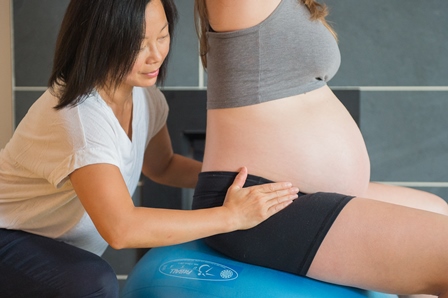 Dr. Loo’s pot of herbs is ready to be boiled and

This is your sign to get outside and get active th

If you think you are suffering from IBS then today

Since the kids are in school a little while longer