The Birth of Caroline*

I have attended hundreds of births, of almost every type, since I began to work as a naturopathic birth doula. Many imagine that I must be involved only in “hippy-dippy” births where everyone is naked, involving chanting.

I love all births, each birth is special to the people involved, and a privilege to participate in.

Caroline’s birth is an example of a fairly conventional birth that I smile, every time I think of it.

I received a call, early Thursday morning on August 25, 2016. It was Stuart*. His wife, Kaylee*, was labouring and thinking about going to the hospital. She got on the phone and described her night: she had gone to sleep at around 11 PM, but has been up on-and-off since 3 AM. She hadn’t wanted to wake Stuart until just now.

Contractions were coming every 5 minutes or so; 20 to 30 seconds long; intensity of about 7-out-of-10. I encouraged her to walk around, keeping moving, as she felt best standing and swaying her hips from side-to-side. I recommended a good breakfast and to start getting ready to go to the hospital. I was also going to get ready and be on my way.

Around 7:15 AM Stuart called again. They had decided to go to the hospital and asked me to meet them there. Kaylee was coping very well, but had decided she would like an epidural. I spoke with her on the phone to offer more encouragement. I gave her a visualization to work with: a mountain. With each contraction, she was simply to focus on getting to the peak of the mountain – once there, all the work was done, and she could relax and release the contraction.

The visualization, having an image to focus on, helped comfort Kaylee as the contractions passed while waiting for an anesthesiologist to become available. Kaylee remained focused and comfortable for several hours until she received her epidural at 11 AM, and was able to relax again, in comfort.

At this point, with all well, and in anticipation of the work to come, it time for a short break for Stuart and I.

By 12:30 PM, Kaylee began to feel “the pressure”. At 8 to 9 cm dilated, her “membranes were bulging” which meant her “water may break” soon (which meant “go time” was imminent). Kaylee remained comfortable, and I reminded her to continue to hydrate with apple juice and perhaps eat some JELL-O (easy to eat, quick energy).

Within an hour, Kaylee was fully dilated and ready to push. This being her second birth, she easily found her place of focus.

She pushed out her baby girl, and was skin-to-skin with her in less than 30 minutes.

Kaylee and Stuart waited for several minutes after her birth, until the umbilical cord had stopped pulsating (to allow for maximal maternal blood transfer), for Stuart to cut it.

Caroline was born, happy and healthy.

*Names have been changed to ensure confidentiality. 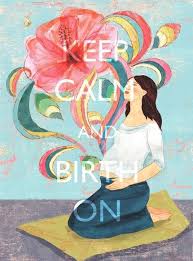