The Birth Of Sarah*

In honour of doula week, I thought I’d share a birth story (with the permission of those involved, of course) with all of you.

Laura* was five days past her due date when things started to get going. This was very good news, as concerns that had come up during her pregnancy had lead her OB to say they would have to induce her before she got through the traditional waiting period of two weeks past her due date. In order to avoid a medical induction, I had been going to Laura’s home mid-day to do induction acupuncture in the days prior to her due date, and just following, to see if we couldn’t get her baby to birth without the aid of synthetic hormones.

On a chilly February morning at 3:45 AM, her husband David* called me to say that Laura’s water had broke in bed with a big gush of clear fluid. I tried to go back to sleep, but as usual I was too excited about what the next 24 hours would hold – I can only imagine how Laura and David were feeling – and drifted in and out of a light doze until I heard from them next.

By 11 AM, they were exactly the same with respect to intensity and timing. At this time we decided it was time for Laura to check in with her physician – only about 1/10 births begin with a big gush of waters breaking (surprising, isn’t it? Movies & TV lead us to believe otherwise …), and it’s important to make sure everything is going OK if it takes a while for labour itself to begin.

It was a couple of hours before Laura was able to get in to see her physician. After confirming that everything was going well for both her and her baby, the nurse in charge sent Laura and David on a three-hour walk and food excursion, hoping it would help to get her labour going. Unfortunately, it didn’t seem to work.

I arrived at the hospital to support Laura and David around 4 PM, just in time for her OB to send us home with instructions to come back around 7 AM the following day if labour hadn’t progressed before then (and she didn’t expect that it would).

Needless to say, at this point Laura was exhausted. Without much sleep since 4 AM, she had spent the day waiting around at the hospital, enduring moderate non-progressing contractions, and wondering when her baby would show up. When we got back to their house, she got into bed, we turned down the lights, and turned on some peaceful music. I did one more round of induction acupuncture and then tip-toed downstairs to tell David to call me as soon as things began to progress or whenever they felt they needed more support. I left and went to a restaurant to treat myself to some dinner. Hey, I thought, it’s very likely I won’t be sleeping through the night again tonight! Might as well get a good meal in!

The last bite of my food was in my mouth when David called. Within an hour of lying down, Laura’s labour had begun in earnest. I zipped back up to their house to find active labour in full swing. Her contractions were 4-5 minutes apart and lasting at least a minute. Because her water had already broken, we left for the hospital after just 40 minutes of these contractions. When we arrived she was 5 cm dilated and progressing well. It was 9:30 PM.

Laura laboured like a champ. David and I supported her as she tried a variety of positions, spent time on the birth ball, and used the shower to sooth her sore back. While David was helping her, I sat in a chair near them and did a bit of a crocheting. It was on a tip from a really talented and experienced doula that I began doing activities like this near the labouring parent when they are really in the thick of it. It’s a helpful visual reminder that everything is progressing normally, and that I (the person in the room who has attended several other births) am comfortable enough to do this relaxing activity while they are being assisted by their partner. It seems to send the message to the labouring parent that they too can relax (as best as they can!) and know that everything is happening as it should.

Around 11:45 PM Laura started to get really fatigued (and who could blame her!). Her reaction to the contractions indicated a specific homeopathic medicine that I thought would be useful, so she took it in a bit of water and made it through the next few contractions. After this she told us that each contraction was harder to bear because she was feeling a lot of pressure and it was hard not to push. With those words we asked the nurse to find the OB on-call, did a quick exam that found her fully effaced and dilated, and it was time for Laura to push.

On our first postpartum visit, I had a little crocheted hat for her that I had begun during Laura’s labour.

Each birth is its own little adventure and it is such an incredible privilege to be along for the ride as doula.

*Names have been changed at the request of the family 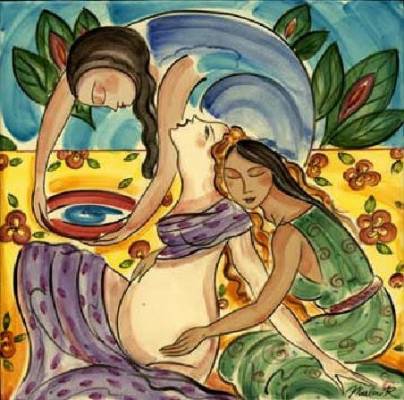