The Dairy Queen Blizzard®: Supporter of The Hospital for Sick Children, but also Diabetes.

Today, August 14, is Miracle Treat Day, meaning if you purchase any size Blizzard® at a Dairy Queen restaurant, they will donate the proceeds to local Children’s Miracle Network Hospitals.

I’m certainly not criticizing supporting children’s hospitals, but a large-size “M & M Blizzard®” contains 150 g (about 6 times the recommended daily limit) of sugar, and if you’ve paid attention at all to the news in recent years, you no doubt are aware that “sugar is the new tobacco”.

Anyway, we can agree that excess sugar is not good for you.

When we discuss “bad” sugar in the diet, we are referring to sugar added to processed foods (not only candy bars, but also ketchup, salad dressings and Dairy Queen Blizzards®), not sugars intrinsic to foods such as fruits. Currently, recommendations (per the American Heart Association) are to limit added sugar content in the diet to 5% of their daily calories, or 24 g (or 6 teaspoons) daily for women, and 38 g (or 9.5 teaspoons) daily for men.

The best way to stay within your limit for sugar consumption is to eat mostly unprocessed foods.

If you are eating a food containing a label, check the label. You will likely be surprised at the amount of sugar present: a can of Pepsi® contains 41 g, a tablespoon of ketchup contains 4 g (is approximately 1/3 sugar).

Oh, and to bring it around to the Blizzard®, maybe it’s a little inconsistent, and kind of cynical, to promote a product that is clearly at odds with human health to support a health initiative. 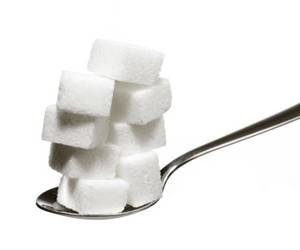 This week's Vegan January meal #inspo is Vegan she

Some food for thought on this Monday.