The Birth of Jayden

Olka was the picture of health when it came to a pregnant woman. She ate extremely well, did prenatal yoga, took her supplements and meditated on a daily basis. Olka’s birth plan was clear: she did not want any form of augmentation (and even refused the membrane “sweep” the week of her due date). She trusted that her son would come when he was good and ready on his own time. “It’s not a rush”, she would repeatedly say. Her outlook on her upcoming birth was simple … trust her body, relax, and let things Be. And so we did …

I received a message from Olka that she had some spotting on Wednesday afternoon. Within 24 hours she was having 30-second contractions every hour, which had kept her up the night before. It was clear that Olka was now showing early signs of labour.

A few weeks before, we had discussed the length of time that a first baby could take. She was prepared for a long labour and didn’t rush anything. I instructed her to walk around to get labour moving along and she was happy to do so. She felt great and was comfortable and excited for what was to come. By 6:30 pm that evening, her contractions had progressed to five to eight minutes apart. Her husband Jon was an absolute dream when it came to supporting her before she needed me. He walked with her, gave her massage, and made sure she ate and remained hydrated. They wanted to remain at home for as long as possible before proceeding to the hospital. So there they stayed. “There’s no rush”.

By Friday morning, Olka’s contractions were six minutes apart, but she remained calm, focused, and Zen. Within a few hours, contractions were four minutes apart, but wanted to remain at home, which I felt was appropriate for someone trying to avoid unnecessary interventions at the hospital. I was so proud of Olka, who had already been in labour over 24 hours, for still trusting in the process, taking her time, and listening to her body.

By 12:30 pm, we arrived at the hospital to see how far she had progressed. When I saw Olka for the first time, she was smiling, laughing, breathing and coping well. Contractions were still four minutes apart. I thought for sure that she was still in early labour, approximately 2-3 cm dilated, and likely would be sent home (or at the very least told to walk around for a couple of hours and return for another examination). Surprise! She was already 5 cm! I am telling you, you wouldn’t have believed it if you saw it. We continued to walk the halls, stopping every once in a while to breathe through contractions, and provide hip and lower back support (which she actually laughed through, and described as “euphoric”).

At 7 cm dilation, Olka’s obstetrician had decided to artificially rupture her membranes, but nature took this birth into it’s own hands and her water naturally “broke” before the obstetrician arrived. Olka got into the shower at that point, which provided her tremendous relief. The warm water on her back was her savior. As her doula, I just remained present to her needs and supported her (and laughed along with Jon, who was such a joy to have in the labour: calm, funny and optimistic).

Olka, trusting her body and knowing her body so well, knew when it was time for her baby to come. The pushing phase of her labour was short, which I believe was due to her breathing into her pelvis and relaxing her pelvic floor (which is hard to do if you are fearful or anxious).

Olka’s first words were “Wow, I thought that was going to be a lot harder than it was”.

I couldn’t feel more blessed to have witnessed such a beautiful birth. I truly believe that Olka’s birth is an inspiration for women who are looking to move forward with their first birth in a natural way. Her obstetrician actually said that he wished her birth was on video to show all expecting women who are afraid of birth that with the proper support team and preparation, a birth can be exciting, joyful and anxiety-free. It is a true testament to how beautiful a labour can progress if you are prepared and just wait, trust, and listen. 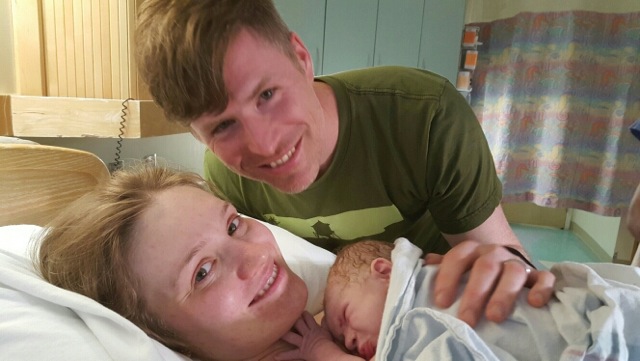