Reflexology for Stress Relief: The Answer is Right Under Your Feet

Welcome to the third and final installment in our March series on anxiety.

This week, we’re discussing an old-but-new therapy that’s making a comeback as one of the easiest and surprisingly effective treatments for stress: reflexology.

Based on the same principles as acupuncture, reflexology is foot massage taken to a scientific level of precision. The idea is that certain areas of the feet correspond to particular organs and systems of the body. By applying pressure to those key areas, it’s possible to stimulate flagging health and correct imbalances.

The reflexology points for the eyes, ears, nose and throat are on the toes; the heart and lungs are represented near the ball of the foot; the reproductive organs on the ankles. Other points correlate to specific emotional states and other parts of the body.

During treatment, a reflexologist uses varying pressure to massage part or all of the foot. Areas that are sensitive often correlate to health issues that need attention. Even if nothing is sensitive, though, reflexology can be relaxing and therapeutic, especially for people who are depressed, anxious or who have chronic pain or stress.

Compared with a control group, hospitalized cancer patients who received reflexology had almost ten times the improvement in their anxiety as that of the group that received special attention but no reflexology. (The reflexology group’s anxiety dropped an average of 7.9 points on the test scale, while the control group dropped only 0.8 points on average).

What’s more, physical results after reflexology show that it’s not just a question of a soothing effect. A double-blind study published in 2012 found that healthy volunteers experienced a drop in their cardiac index, a major indicator of heart function used in intensive care. It’s also used as a physical measurement of anxiety and stress, so a modest drop like the one observed is generally a good indication of lessened stress.

Like many mental health issues and stress-related concerns, anxiety is a problem that can creep up on you and that can be difficult to treat. There are so many options and the choice of a practitioner – not to mention, the first visit to that practitioner – can be overwhelming. At TCNM, we know that there is no one perfect treatment that fits the bill for everyone. It’s important to find the right doctor and the right approach for you.

Are you interested in trying out reflexology or another anxiety treatment for yourself? Learn more about reflexology at our reflexology page, or  give us a call or e-mail us at info@tcnm.com to book a session with Melissa or Melanie, our resident RMTs and reflexology experts. 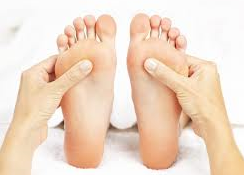 For those with New Year’s goals of eating less m

Happiness is the secret ingredient to life😁